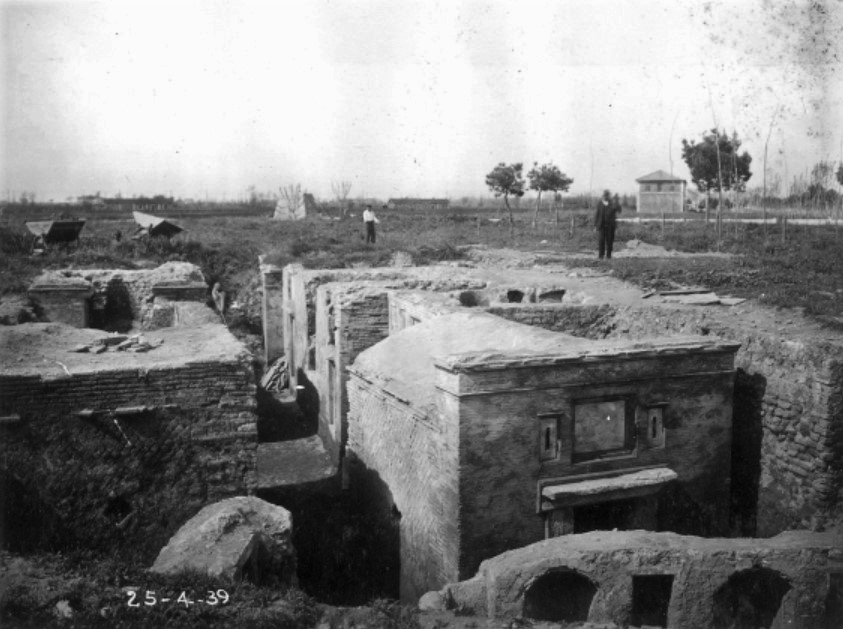 In the 1920’s numerous burial chambers were discovered in an area adjacent to Fiumicino canal “ex O.N.C.” on the property of the Opera Nazionale Combattenti, a National Charity Association of Combatants, founded during the first World War to assign reclaimed plots of land to veterans.

The tombs, excavated between 1923-1928, were decorated with frescoes, stucco and mosaics, and they likely represented the northern limit of the Porto Necropolis.

Due to the poor state of conservation the tombs were reburied, in order to preserve them from atmospheric agents: they lie 2,5 meters beneath present-day street level.

In 2002-2003 a campaign of excavation and restoration brought them back to light, and allowed for a better understanding of the buildings chronolgy and the discovery of a new tomb (J). On this tomb’s façade was an inscription with the deceased’s name and, on the rear, a dedication to the god Asclepius. Both the tomb and inscriptions can be dated to the 2nd century AD.

The area is visible along via Redipuglia, however, due to the absence of minimum safety conditions, it cannot be visited.