The exhibition ''Chi è di scena! Cento anni di spettacoli a Ostia antica (1922 - 2022)" traces the long history of events that have been held, and are still held, in the Roman theatre.
The exhibition, curated by Alessandro D'Alessio, Nunzio Giustozzi and Alberto Tulli, with the support of Electa, will be open to the public from 21 May to 23 October 2022.

One hundred years ago, in spring 1922, Plautus' Aularia was performed by primary school children in Ostia, in the Roman theatre, which had not yet been rebuilt (as revealed by an unpublished series of historical photographs).

Those first performances were the testing ground for the introduction of a more demanding and organised theatrical form, for which a profound transformation of the building was necessary. Thanks to the intuition of the archaeologist Guido Calza, then director of the area, and also supported by the artist Duilio Cambellotti, a set and costume designer in Ostia, both the excavation work and, above all, the restoration and partial reconstruction of the monument were facilitated. This - though not without controversy - made it possible to hold classical plays in a space that could now accommodate up to 2,800 spectators.

The programme continues to this days with a careful selection of directors and actors, among the best names on the Italian scene, choreographers and dancers, set and costume designers. Not forgetting pop, rock and electronic music.

The numerous archival materials in the exhibition retrace the most significant moments of historical performances and an evocative video, a montage of photographs and period films, reveals the frequentation of the excavations and the visual exaltation of emblematic elements of the archaeological landscape of Ostiense in the various eras.
The exhibition is introduced by a section focusing on the history of the monument.

The exhibition, and the rich catalogue that accompanies it, published by Electa, reconstruct for the first time philologically, and through material that in many cases has never been published before, this long history of performances of comedies, tragedies, ballets and concerts that have involved some of the most famous artists in the world of art and entertainment.

The exhibition is introduced by a section focusing on the monument. From the excavations of Rodolfo Lanciani in 1880/81 - which led to the discovery of two epigraphs, allowing the dating of the building of the theatre to the Augustan age and its reconstruction in the Severan age - to those of Dante Vaglieri in 1907, attested by a rich photographic documentation - by Vaglieri himself and Italo Gismondi, perhaps the authors of the first stereoscopic shots - that led to the isolation and consolidation of the building and the overall analysis of the structure, to those of Calza, who first excavated and reconstructed the cavea and later rebuilt other parts of the theatre. The forthcoming restoration work called for by Alessandro D'Alessio, Director of the Ostia Antica Archaeological Park, which will affect the monument between this year and next, also finds a dedicated space in the exhibition with illustrated panels.

The numerous materials, from the archives of the SIAE Theatre Museum Library, INDA, Cinecittà Luce and the artists, including the Duilio Cambellotti Opera Archive, and from numerous private collections such as the Andrea Sironi-Strauβwald Collection, are displayed inside the theatre's archways, in four exhibition modules designed site-specifically by Stefano Boeri Architetti: conceived in continuity with the theatre's forms, the project adapts to the area's different spatial conditions, creating an exhibition itinerary with a contemporary language within the archaeological context. The coordinated image of the exhibition, created by the Leonardo Sonnoli studio, is taken from a 1949 poster by Mario Sironi.

Opening hours, how to visit and how to buy tickets can be found on the page Opening Hours and Prices 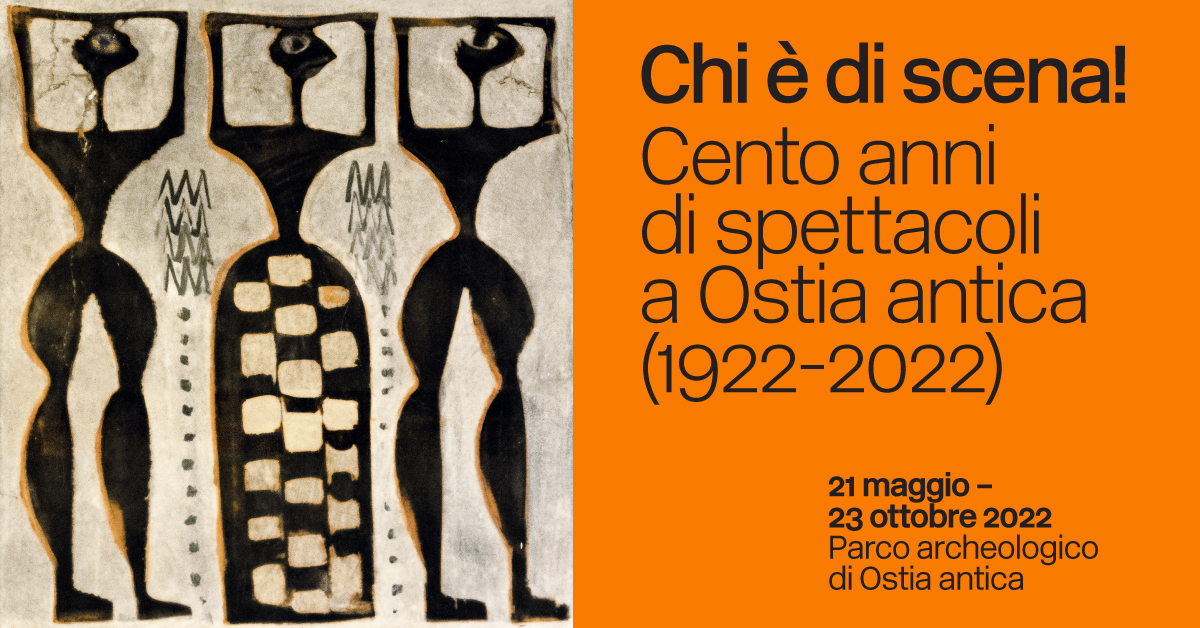